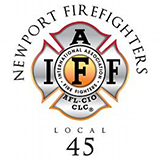 Darin says less than 1 percent of those are for big structural fires. Newport Fire Union President Jake Silvati says the department is understaffed.

Silvati is pushing the city to staff 12 firefighters instead of the 11 it has been running. He says that’s enough to fully staff two fire trucks and two ambulances.

City Manager Tom Fromme says Newport does not have the money for another firefighter and the budget is too tight already. He says the city has gotten rid of more than two dozen positions in various departments since he took over in 2005.

“So, not only have we cut costs as much as we could through extending the life of equipment and sometimes just not even replacing equipment, we’ve also had a reduced employee numbers. Now, myself and the board, where we locked them to lay people off, so we done a lot of that to attrition,” Fromme said.

The city, like a lot of others in the area, relies on mutual aid, which is when other departments help on calls.

“The problem with that is the late response. So, these other fire apparatus are coming from neighboring communities and are not in downtown,” Silvati said.

The budget is not going to get better anytime soon. Fromme says without new businesses, like what’s projected at the Ovation project, the city has no way to generate more money because Kentucky limits how cities can bring in revenue.

“I would say if an office building would file the music venue, the earliest that you would possibly see results from that would probably be three to four years down the road,” Fromme said.